It can grow abundantly late in the mushroom season, often covering dead hardwood logs with dozens of fruiting bodies. When very, very young, it is soft and supple. It’s deep mahogany color looks great, at least until you pick it and it bruises a dingy brown. But the couple of times that I’ve given it a try, I’ve been disappointed with a soggy, bland mushroom.

From a technical standpoint, I. resinosum is a saprobic polypore that produces a white rot in dead hardwoods.  It can also be found on conifers, although there is some debate as to whether that is still resinosum or perhaps a very similar cryptic species often referred to as I. benzoinum. Whether these are the same species or not, I cannot really say, but the particular mushrooms that I am using are growing on hardwoods.

Being a polypore, this mushroom is best eaten fresh and is not really suitable for drying. In my opinion, there are no polypores that are actually suitable for drying as a storage option, not if you plan to actually cook the mushroom for food (Yes, maybe you can boil the hell out of it for several hours then strain it through a mesh strainer a couple of times and produce an “edible” soup, but that is not using your edible polypores wisely). Members of the Polyporales often contain what is referred to as “skeletal” hyphae (part of the context of the mushroom) which harden into a very dense substance when dried. Mushrooms like Grifola frondosa (Hen of the Woods) and Laetiporus sulphureus (Chicken of the Woods) are both in Polyporales and both harden into an irreversible state when they are dried. I. resinosum is in Polyporales and contain skeletal hyphae, evident by how tough and fibrous they become as they mature. Therefore, we are looking for cooking and preservation methods that don’t dry out the mushroom.

What this means in the field is that we need to collect resinosum when it is very young and tender. If there is any toughness to the mushroom, it is too old for food as it will not tenderize when cooking. A good way to think of this is to collect them when they are in the “marshmallow” stage, so that their texture is similar to a marshmallow’s squishy texture. It should also tear easily by hand. Sometimes you can cut the growing edge off of slightly more mature specimens, but by far the best mushrooms are the very young “buttons”.

Resinosum has a very high moisture content, part of the reason why it tastes so bland when not thoroughly cooked. The task of the cook is to remove the majority of the liquid, concentrating the flavors in the mushroom, without allowing the mushroom to toughen up. Sauteing can accomplish this when you are working in very small batches, but resinosum contains so much liquid that it is easy to overwhelm the pan and you end up with a bunch of soggy, stewed mushrooms. A simpler and more effective cooking method is to roast the mushrooms in an oven. This allows the some of the liquid to evaporate from the mushrooms, partially drying out the mushroom while cooking it and creating some nice browning. When resinosum is cooked like this, you end up with nice deep brown mushrooms with a firm bite, al dente if you will. Its flavor is still very mild, but pleasant. At this point, you’ve ended up with a mildly bland but texturally interesting mushroom, which is better than a mildly bland and texturally mushy mushroom, in my opinion. So the next step is to add some flavor to this mushroom!

I recently read a recipe by Patch Troffer, the chef at Marlow & Sons (New York Times, Nov 4, 2018), which did just that by taking thoroughly roasted mushrooms and marinating them in an oil and vinegar solution with lots of herbs. The end result is a marinated mushroom that still has a firm, al dente texture and lots of added flavor. A couple of key techniques is to thoroughly cook the mushroom to a deeply browned state (but not burnt), to add the marinade while the mushrooms are still hot (this allows the mushrooms to absorb plenty of marinade) and to make sure that your marinade is highly seasoned. Remember that only a small amount of the seasonings in the marinade actually end up in the mushroom. Most remain suspended in the marinade and don’t end up in your mouth, so you almost have to over-season the marinade. If you have access to a smoker, this mushroom would definitely benefit from a light smoke before roasting. Here is my take on the recipe for Herb Marinated Resin Polypore. 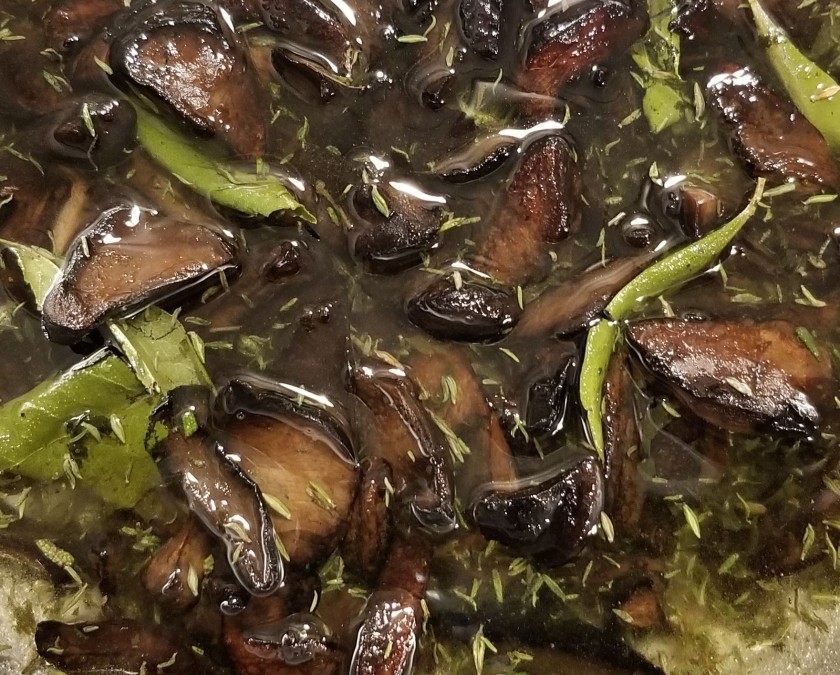 My name is Luke Smithson and I am a lifelong forager. My early foraging came in the form of gathering berries in the woods, hunting and fishing with my folks and experimenting with weeds found in the yard. A chance encounter with Euell Gibbons “Stalking the Wild Asparagus” led me to puff balls, day lilies and crayfish. The more I learned, the more I wanted to learn. Plants, mushrooms, wild game, shellfish, insects...they all became the subject of my culinary curiosity. Today, I am the President of the New Jersey Mycological Association, an avid experimenter in the garden and a professional chef. But I am also an eager student, striving to learn something new on a daily basis. View all posts by Luke Smithson